The sensation of auditory binaural beats occurs when two sounds of similar frequencies are presented one to each ear with stereo headphones or speakers.  Binaural beats influence the brain through a phenomenon called frequency following response; which is when brainwaves fall into step with a specific frequency similar to a tuning fork. The two different tones, close in pitch, are played in each ear resulting in a third wave-like sound.  For example, if a frequency of 100 Hz is played in one ear and 110 Hz is played in the other ear, a binaural beat of 10 Hz is created by the brain. Brainwaves match or “follow” the binaural beat resulting in an increase of 10 Hz brainwaves.

Binaural beats work by playing separate frequencies to each ear, for this reason they are most effective with stereo headphones.  The benefits of binaural beats are far reaching.  Just 15 to 30 minutes of meditation a day with binaural beats can improves one happiness and overall well being.  Other benefits include restful night’s sleep, increased energy, and relief from stress, anxiety and pain.  Depending on the carrier frequencies binaural beats can be very soothing and relaxing to listen to.

Isochronic tones work by emitting beats of a single tone at regular intervals either through stereo speakers or headphones to cause brainwave entrainment.  The volume or intensity of the sound goes almost directly from 0 to 100 and back again in an evenly-spaced manner. This leaves a stronger impression on the brain, compared to binaural beats or other methods that use wave-like pulses.

Isochronic tones differ from binaural beats in that they use a single tone, not two.  The biggest advantage of Isochronic Tones is that headphones are no longer needed.  When isochronic tones are utilized as a stimulus under specific circumstances, research has shown evidence of beneficial outcomes such as anxiety reduction and increased concentration.  The audios from Tonal Meditation are natural relaxing and the Isochronic Tones allow the listener to reach a deep meditative state. 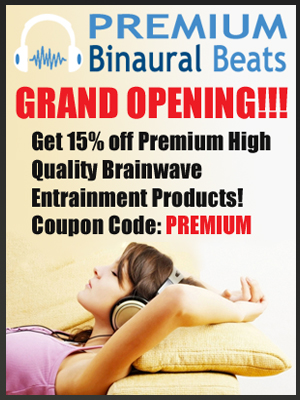